Upended Observation – Air Looking As If Lying Beneath Water 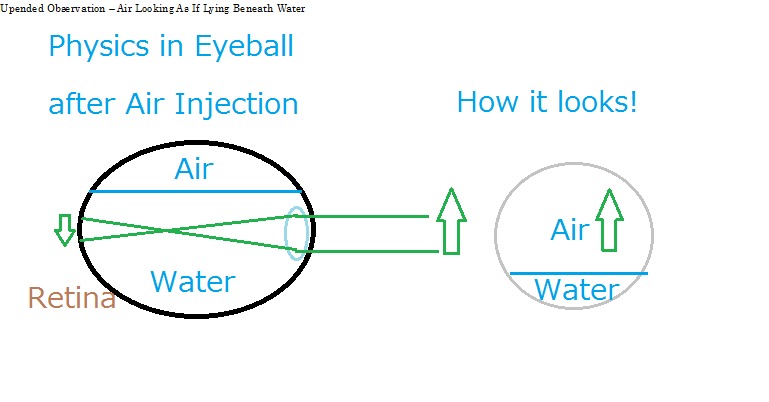 I have recovered from the surgery of a problem found on the retina of my right eye – a condition called 'macular hole' in English.

In order to help recover speedily, air was injected into the eyeball. The air, which once took 85% of the eyeball space, disappeared in two weeks. Over the first 10 days, I took it for granted that I was watching the air in the upper half of the eyeball and water (hydatoid) beneath it. My knowledge of physics tells nothing else. But, I was just cheated by what I believed I was watching combined with my imperfect belief or prejudice that air is lighter than water therefore the air always appears to stay above the water.

The outcome is the air looking as if lying beneath the water. I did not notice that I was cheated by what I saw until the doctor told me that the air bubble had largely shrunk when it looks as though the water were shrinking.

A) External sight beyond the lens crystallina - Optically upended on the retina by the upending force of a convex lens.

B) Internal sight before the convex lens (inside the eyeball) - Not optically upended, i.e., upright on the retina, because it is not affected by the convex lens.

C) Overall sight (both outside and inside the eyeball) - Neurologically upended as a whole in the brain.

Watching both A (upright) and B (upended) simultaneously as an integrated single sight, with air looking as if lying beneath water in the eyeball.

We should think of a possibility that what looks truly real might be cheating us. Biased or imperfect sci-tech knowledge could make it worse. What reputed global names claim are not necessarily true. We need to rely on correct science and logic.