Threat of Biometrics to Security and Its Structure 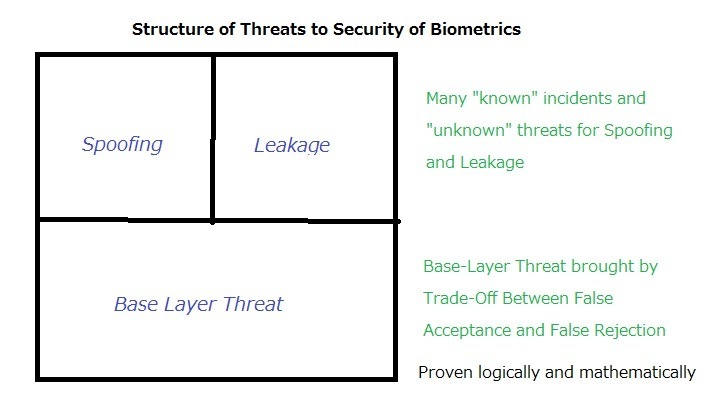 Threats of biometrics to privacy, democracy and humanity are already taken up by quite a few people, but not many people are discussing the threat to security of biometrics and many of them are often carried away by the eye-catching ”known” incidents of spoofing and leakage. Few people pay attention to the base-layer problem solidly inherent in the biometrics technology.

Assume an extremely unlikely scenario that someone comes up with a set of dream solutions by which there can be no spoofing and no leak of biometric data altogether. Even such a 'perfect biometrics' would only provide the level of security lower than a password/pincode-only authentication in cyberspace because biometrics needs to be deployed with a fallback measure (usually default password/pincode) against false rejection (false non-match) in a 'multi-entrance' deployment.

This peculiarity constitutes the base layer of the threat to security of biometrics. On top of this base layer, biometrics gives us additional layers of threats; spoofing and data leakage, which are supposed to haunt us for long in this real world.

By the way, as for the threats of spoofing and leakage, we need to assess both “known” incidents or precedents and “unknown” threats.

Just as the threat of man-made crimes should be assessed differently from the threat of natural disaster, new threats of ever-evolving digital crimes should be assessed differently from the time-honored threat of pre-digital crimes. If we have to wait for an incident or precedent to be “known to us” before we are allowed to discuss the threat, we would never be able to logically and mathematically identify the threat and prevent the identified threat from actually turning into an incident or precedent.

Whether a logical and mathematical reasoning of a potential threat is correct or wrong can only be tested logically and mathematically, not by whether it is known or not, whereas a physical phenomenon, for instance, whether this key fits into that lock or not could be tested physically.

Separately we could assess the threats of biometrics to the security of individual persons as well as that of the overall networks. Attacks on individuals must not be dismissed as a trivial matter.

Mr. A, for instance, is not wealthy so he can be confident that no bad guys would try to attack his accounts for money. He cannot be confident, however, that no bad guys would try to break into his accounts for personal revenge or harassment. He believes he has lived honestly, trying not to harm anyone. But it does not guarantee that he does not get hated. When his biometric data gets leaked, it could be an issue of life and death for him and his family.

And, it goes without saying that there are millions and millions of individuals who have money, power and influence that bad guys would not hesitate to spend their resources to pursue

Moreover, we know of the tragic events that actually happened – https://www.valuewalk.com/2018/02/biometrics-aadhaar-danger/

In this article we referred to an ill-thought deployment of biometrics with an explanation with graphs of what are false rejection and false acceptance.

As such, it is really sad to see so many people being (mis)led to believe that, although biometrics may be a threat to privacy, the biometrics must be supported by governments and citizens because biometrics contributes substantially to better security. This is a big myth that must be busted.